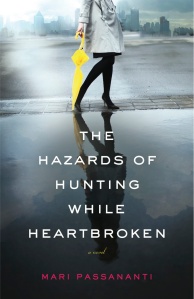 I met Mari Passananti through a mutual author friend, Wendy Walker, and I’m so glad I did. She is truly the sort of person who makes her own luck and doesn’t take “no” for an answer. In 2011, after leaving a longterm law career to pursue her real dream of writing, she published THE HAZARDS OF HUNTING WHILE HEARTBROKEN with her own Rutland Square Press. Two years later, she veered off the “chick lit” path dramatically to release a political thriller called THE K STREET AFFAIR.

Like self-publishing phenom Heather Gaynor, she’s an inspiration to every writer who has what it takes to make it in the big leagues and won’t stay put until she gets there. I’m honored to have her here today.

After the interview, leave a comment for a chance to win a signed copy of one of her books. This week, you’ll have two chances!

1. You practiced law for many years before deciding to take the plunge and try your hand at writing full-time. Was this something you always knew you wanted to do? If so, what gave you the push to finally take that leap and how did you make the transition?

I practiced law at the beginning of my career, and left law firm life to become a headhunter, which I did happily for several years. I always wanted to write, and I had flirted with the idea of writing a book for I don’t know how long. Then I had one of those milestone birthdays that makes you stop and think, and I decided to go for it.

This may sound macabre, but I looked in the mirror, realized that (in actuarial terms) I’m probably halfway out of time, and that if I want to reinvent myself, to take a stab at making it as an author, I had to get to it.

I had one of two key things I should have had when I took the plunge: a bit of a financial safety net. Little did I know that I would also need a tribe. I thought writers lived a solitary existence, that they worked at cluttered desks surrounded by cats and overgrown plants. Maybe that works for some teeny minority, but I think most of us benefit from robust discussion with other professionals about both the craft and business of fiction. 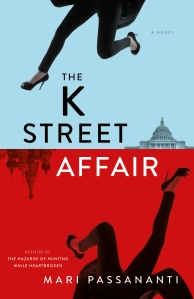 2. Both of your novels (THE K STREET AFFAIR and THE HAZARDS OF HUNTING WHILE HEARTBROKEN) were published by theRutland Square Press, which you formed in 2011 (please correct this if the year is wrong – or let me know if it’s correct). Can you talk a bit about what led to this decision?

With THE HAZARDS: Chutzpah. Impatience. Newbie enthusiasm. Confidence in my sales and management skills, and confidence in the professional editor with whom I work. Plus a traditional deal falling apart. The experience with THE HAZARDS was fun and modestly profitable, and K STREET, while a suspense novel, is a really quirky book that doesn’t fit neatly into any genre slot. I didn’t think it would sell to the big houses, so when I finished the book in early 2012, I never shopped it at all. Mistake? Perhaps.

3. Spreading the word is one of the most daunting aspects of self-publishing. What did you do to get your titles out there?

I beg everyone I know who belongs to a book club, or who knows someone who belongs to a book club, to consider my books.I love book club visits.  I hired a publicist and got some nice reviews. I did a blog tour. I did two very targetedGoodreads giveaways. I gave readings at my local public library for each of my books. Libraries are great to local authors, at least in my experience. I wrote a piece relevant to K STREET for Writer’s Digest, about putting your politics in your novel.

4. Your most recent novel, THE K STREET AFFAIR, is a political thriller, while your debut has been described as chick lit. Do you prefer one genre over another or do you just write and worry about categorization later?

I just write and worry about the category later. I think I suffer from some bizarre attention disorder. I get lost in a world for months and months, to the exclusion of all else, but them I’m done and I want to learn about something else.

I love thrillers and “chick lit” and I always read them on vacation, on airplanes, or after reading something super heavy, e.g., a Holocaust novel or any story about  characters living under a repressive regime. The majority of what I read actually veers more “literary,” as does my work in progress. I don’t love labels, and I feel like there’s a lot of crossover between the commercial and literary camps, but everyone uses them, so I will play along.

5. You entered the business towards the beginning of the self-publishing revolution. In your experience, how have attitudes and resources changed for the better since you began? Have they worsened at all?

That’s funny. I thought I was late to the party. It’s so very crowded and people are getting cranky. I can’t comment on the large scale resources or products or packages. I wanted an independent press that produces a product that looks like it has a big house behind it. I think publishing is like any other business: if you want the industry to take you seriously, you must behave like a professional at all times. RSP hires an editor, a cover designer, an interior/layout designer, an e-book architect and other professionals. I’d advise any author thinking about publishing through an independent press to look at the finished product. If you want to sell foreign, film or audio rights, you almost definitely need an agent. You need a realistic marketing and publicity plan and budget, because as an indie, you can forget seeing your upcoming release reviewed in the NYT. I know that sounds harsh, but it’s the reality of the business.

6. What can fans expect next? Are you working on a third novel? Do you expect the Rutland Square Press to begin publishing other authors?

I am almost done with a rough draft of a third novel, which means the hard part is about to begin. The book is a more “literary” project than either THE HAZARDS or K STREET, and I’m excited about it. The novel looks at the relationship between aid and exploitation in the developing world, modern colonialism, and racism, through the eyes of three very different women.

RSP gets queries with astonishing frequency, and some of them are quite good. A novel would need to knock my socks off, and the author would need to be someone whose sense and sensibility were sympatico with mine, because an expansion of the list would basically constitute a business partnership with that author. I never say never.

7. How did you weather the inevitable rough patches?

I used what I learned in years of sales (because headhunting is sales, at the end of the day): There is no “no.” You just keep going.

One thing I’ve realized is that distribution is a huge challenge, and it’s one of the key reasons I plan to shop my next book the traditional route. Small presses cannot handle returns like the big houses, and while no author likes to think about his or her work being returned unsold, the inability to provide this service presents a huge hurdle. Book sellers won’t order books they cannot send back, which means they don’t want to host author events for those books, either. Indie presses also face a steeper uphill climb than the traditional houses (which already compete fiercely for review space) in getting their titles reviewed by major media outlets, even with the help of a talented publicist on hand.

I’ve found that the writers who seem happiest, and make the most money, on their own, or with tiny indie presses, tend to write in a specific genre, if not a series, and they tend to produce at least a title a year, and they have at least fifty or sixty hours a week to devote to writing and marketing. Or they have a platform, a following, and a track record, before they make a change from traditional to self or indie publishing.

8. What’s the best piece of advice you can share with aspiring writers who are considering self-publishing?

Everyone likes to point to the outliers. The wild stories like the woman with the bondage books. Nobody can predict what catches on, and chances are staggering your book will not become the next hot, household name vampire/bondage thing. You need to have a plan for when you’re not in that .001 percent.

The basic advice for anything entrepreneurial holds true: You must be tenacious, organized, and willing to invest. It takes money to make money. Allison Winn Scotch had a great piece on her jump from traditional to self publishing on WriterUnboxed this week. Everyone should read that post.

But before you even reach the publishing stage, you must write a good book. A great book. No shortcuts here. I think anyone who wants to be taken seriously as a writer, who throws a book out there without either working with a professional editor or workshopping the novel with a reputable writing program, is stacking the deck against him/herself.

Mari blogs about life, motherhood, current events, and whatever else strikes her imagination at thelittlegrape.blogspot.com. Be sure to keep up with her  there, on Twitter, and at MariPassanantiBooks.com.

Comment below to win a signed copy of either THE HAZARDS OF HUNTING WHILE HEARTBROKEN or THE K STREET AFFAIR. Please specify if you are only interested in one. The giveaway will remain open until 11:59 p.m. Thursday, January 16, at which point we’ll pick two winners at random. Best of luck to you all!
(Please note that, due to cost, the books can be shipped to U.S. and Canada only.)

I’m just a week away from unleashing a sneak peek at the cover of Desperately Ever After and a chance to win some advanced copies. Sign up here for exclusive updates and you’ll be the first to know!

If you are a published/soon-to-be-published author and would like to be interviewed for Skipping Midnight, please click here.