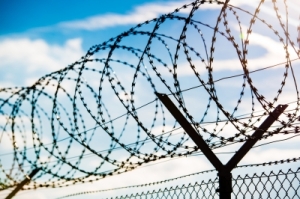 There is a story flying around Twitter today about a crime novel … written by an incarcerated convicted murderer.

As reported by the New York Times on Friday, Cuts Through Bone earned first place (which includes a publishing contract and $10,000 advance) in  a debut writing contest sponsored by Minotaur Books* and the Private Eye Writers of America. The 44-year-old author drew inspiration from “Law and Order” episodes, books and maps about New York City, and novels he borrowed from his South Carolina maximum-security prison library, where he works handing out periodicals every day. It’s been 25 years since he last saw the outside world.

Alaric Hunt is reportedly serving a life sentence for the 1988 murder of Joyce Austin, a 23-year-old Clemson University graduate student. Austin died of smoke inhalation when Hunt and his brother set fire to her 12-unit apartment building (as well as Clemson’s Fort Hill Mansion) in order to distract police while they robbed a nearby jewelry store. They stole $200 worth of women’s rings.

While Minotaur did not know Alaric Hunt’s situation when it declared his novel a grand prize winner, Thomas Dunne Books* editor Toni Kirkpatrick reportedly found the development intriguing. And despite Cuts Through Bone‘s mixed reviews (with  Publishers Weekly criticizing its “unremarkable plot” and “overblown prose,” and Kirkus Reviews calling it a “down and dirty debut”) she inferred that Minotaur would work with Hunt again, expressing hope for more successful titles in the future.

This story struck me on a few different levels. First, there was my immediate disgust/jealousy that someone convicted of taking a young woman’s life could receive such priceless press for his novel in The New York Times. Then there was a bit of pity for him as a man. Then there was sorrow for the mother of Joyce Austin, who is experiencing the pain of her daughter’s death all over again. And, yes, there was a bit of shame that if a convict can handwrite a contest-winning novel in prison, with no access to the outside world or (I presume) the Internet, I have no excuse for writer’s block. Ever.

And finally, there was the ultimate philosophical conundrum that I pose to you, Skipping Midnight readers. It’s a question that I ask/cry/scream every time the media glorifies a “villain” and shoves him/her down our throats: Even though Minotaur was unaware of Hunt’s situation when they chose his novel for a publishing contract, how much are they milking it now that they know? Even though his novel has nothing to do with his crime, are his publishers (and the media, and society) using Joyce Austin’s death to inject Hunt with celebrity status and sell more of his books?

* Minotaur and Thomas Dunne Books are both imprints of St. Martin’s Press