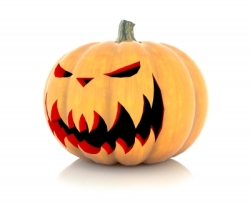 I have a confession to make. I’m a wuss. Not when it comes to roller coasters, thrill rides, or helicoptering around Hawaii with no doors, mind you. But try to get me into a haunted house and there’s an extremely good chance I’ll wind up clocking some 15-year-old “zombie” making minimum wage, while screaming at the top of my lungs and flinging metal props to aid in my escape.

And yet, I love Halloween. I love the colors, the fanfare, the ability to let yourself go and embrace some inner wild side. (So… the same reason your nice muffin-baking neighbor is reading 50 Shades of Grey… again.) What I don’t like is watching deranged psychopaths maim, torture, or murder people. The world has enough of that already, IMHO, so it isn’t fun for me. I get that other people can detach themselves and just enjoy the story, but… need I remind you about that poor 15-year-old “zombie” who now has to go to his Fall Fling wearing an eye patch?

Instead, my top Halloween movies are the fun-creepy kind. The kind you watch with friends, quote at random times, and follow with a good night’s sleep. They aren’t necessarily for kids – just kids at heart. So grab a bowl of candy corn, choose a number, and enjoy:

Why: I’ve never forgotten that sizzling rendition of “I Put a Spell on You.” The bully situation is SO early ’90s (he calls the hero “Hollywood” and is somewhat obsessed with his sneakers). It has the only CAT I’ve ever actually liked. I still want dress up as part of the Sanderson trio someday (any volunteers?). And Bette Midler’s lips in this are just, like, Wow.

2. THE NIGHTMARE BEFORE CHRISTMAS

Why: It’s a musical for people who detest musicals. It’s extremely clever. It takes two polar opposite holidays and fits them together perfectly. There’s something about Tim Burton. And the animation is entertaining on its own.

Why: Tim Curry in fishnet stockings and a bustier. Plus, the Time Warp is extremely catchy; you’ve been warned.

Why: By creep factor, this probably tops the list. But it’s all psychological. It’s Jake Gyllenhaal before he was JAKE GYLLENHAAL, and it will leave your mind twisting and turning for days!

6. HARRY POTTER AND THE PRISONER OF AZKABAN

Why: Duh. Because Harry Potter rocks. Extra points if you gather all eight movies and do a Halloween/Harry Potter marathon. With chocolate frogs.

Why: Tim Burton actually made this twice – once as a live action short in 1984, and again in 2012 as a full-length, animated movie. I’m a fan of both, but I love the fact that Burton kept this story close to his heart for three decades, waited for the technology to catch up to his vision, and then did it right (and did it ONCE – I’m looking at you, George Lucas). If you have a dog, had a dog, or just like dogs, you’ll love Frankenweenie.

Tip: I wouldn’t recommend something that ends like Marley & Me… but you might want to keep a box of tissues nearby, just in case.

Why: It’s a modern classic. It’s a cultural icon. It has a cult following. And it’s the only movie in which Anjelica Huston doesn’t creep the bejeezus out of me.

Why: Some people might disagree with this, but I think Tim Burton (yes, again) captured the gloomy, damp, gray, creepy mood of Washington Irving’s classic perfectly. Johnny Depp is great as the bumbling, studious, ill-fated Ichabod Crane. Plus, it contains Christopher Walken’s first ever on-screen kiss… and it’s certainly not dull…

Why: If you can stomach a little more gore, the top-notch cast of Woody Harrelson, Emma Stone, Abigail Breslin and Jesse Eisenberg does not disappoint. It’s an extremely smart, funny take on the whole zombie apocalypse craze. Don’t miss the hilarious cameo by Bill Murray.

What will YOU be watching this Halloween? Tell me what I missed!
.

4 responses to “Halloween movies for scaredy-cats”