So, do you let your daughter watch Disney princess movies? 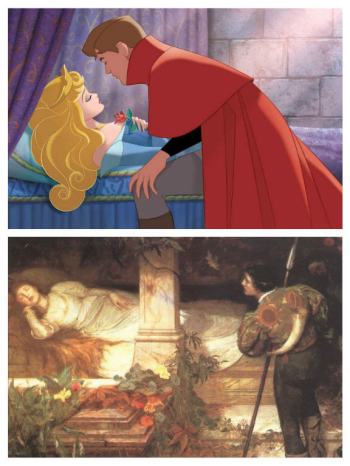 The original Sleeping Beauty tale, entitled “Sun, Moon, and Talia” by Giambattista Basile (1634), could just as easily have been called “Date rape in the 17th century”

When I decided to write a series of books that challenged the way we look at fairy tale princesses, I suspected I might one day have to explain myself to my children. Of course, when I first came up with the idea for Desperately Ever After, I was still a kid myself—a high school sophomore, learning about love for the first time and flirting with disaster.

Fast-forward eighteen (yikes!!!) years, and I have a spirited little girl who has fallen in love with Disney movies and the beautiful, charming women who claim the title roles.

In truth, I didn’t initially think of this series as being anti-Disney—and I’m still not sure I do. Rather, I think of it as a continuation of the familiar stories (none of which originated with Disney, by the way) told for a generation that was raised on The Little Mermaid, entered adulthood watching Sex and the City, and envisioned the future while gobbling up Desperate Housewives.

But then someone asked me whether or not I was going to let my daughter watch the Disney princess movies. You know … considering my books and all.

I have to say, it caught me off guard. Why wouldn’t I let her watch them?

But then the paranoia set in. Was it hypocritical to sit my little girl in front of Sleeping Beauty, knowing what I know about the original 17th century poem? Was it wrong to belt out “Part of Your World” with her, having drawn from Hans Christian Andersen’s far less cheery mermaid ending in my own book? Would it be disingenuous to let her watch the happy couple ride into the sunset with the assumption that they lived happily ever after for the rest of their days—even though that’s the number one assumption the Desperately Ever After puts to the test?

Or would it be more hypocritical to keep her from all of that, considering how much I loved the animated epics as a child? Would censoring them send the message that my little girl is incapable of discerning fantasy from reality (maybe not as a toddler, but when she’s five, ten, sixteen years old) and has to have Mommy do it for her?

After all, I adored Belle and Ariel and Jasmine when I was her age—and I certainly didn’t grow up acting like a princess. Nor did I become the sort of woman who cripples herself with heels when sneakers are a perfectly acceptable option; or who spends hours beautifying herself in order to get the attention of a man; or who plays the helpless damsel in order to get help for a task she’s perfectly capable of handling herself.

And come to think of it, neither did those Disney princesses everyone likes to rail against—at least not those from 1989 on.

Think about it. Belle wanted adventure above all else. Ariel and Jasmine wanted freedom. Mulan and Pocahontas wanted both. Between the five of them, they staged a one-woman rescue mission into a monster’s castle, rescued a full-size man from a shipwreck, went to war, stopped a war (albeit temporarily), and challenged outdated and forbidding expectations about how women should behave in society. And I challenge anyone to find fault with the lessons taught in Frozen or Brave, both of which show that romantic love is only one kind of love, and that saving the day doesn’t always warrant a wedding.

Sure, the original trio (Snow White, Cinderella, and Sleeping Beauty) did little more than smile and sing about love … but even they can teach young women that kindness is more honorable than cruelty, that whining doesn’t get you anywhere, and that you can make the most of a crappy situation without resigning yourself to it.

The way I see it, most people who take issue with “Disney princesses” aren’t objecting to the characters (again, minus the original, less enlightened trio), but the way they’re marketed after the fact—and the culture that can create. Seriously, how long is Belle wearing a gold ball gown in Beauty in the Beast? A matter of minutes.

So yes, my daughter watches Disney princesses and I have no problem with it. That doesn’t mean I’m going to put her in a Cinderella dress for Halloween, but just this weekend I stumbled upon a Little Golden Book collection of Disney fairy tales at our local library fair … and I bought it.

The way I see it, if the only lesson she takes away from them is that pretty girls are the only ones who get happy endings … or if she spends her whole life waiting for a “prince” to swoop down and solve all of her problems … or if she believes love can really be “true” when it’s based solely on good looks and an hour of dancing … then I am the one doing something wrong, not Disney.

Check out the Amazon Bestselling series,
Desperately Ever After!

Laura is a participant in the Amazon Services LLC Associates Program, an affiliate advertising program designed to provide a means for sites to earn advertising fees by advertising and linking to laurakenyon.com.

4 responses to “So, do you let your daughter watch Disney princess movies?”