Q&A with bestselling author Miranda Dickinson — plus a giveaway!

When it comes to “women’s fiction,” “chick lit,” or whatever you’d like to call it, there are some names that stand far above the rest: Kinsella. Giffin. Weiner. Dickinson. Today, I am truly ecstatic to be chatting with bestselling author Miranda Dickinson, author of titles like Fairytale of New York, It Started With a Kiss, and her latest, Take a Look at Me Now.

So grab some coffee, take a deep breath, and enjoy what she has to say. After the interview, leave a comment for a chance to win a signed copy of Take a Look at Me Now!

With five critically acclaimed novels to your name (including four Sunday Times bestsellers), it’s difficult focusing on just one! But what can you tell us about your latest creation, Take a Look at Me Now? 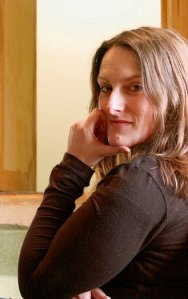 Take a Look at Me Now is the story of Nell, who turns her life around when she is unexpectedly hit by redundancy. Instead of being a victim of what’s happened and waiting to find another job, she blows her redundancy cheque on the trip of a lifetime to San Francisco, where her cousin Lizzie lives. Here in this positive city, she reconnects with a long-held dream and, inspired by the people she meets there, decides to change her life.

What do think people will love most about this book? What do you love about it?

I think people will love the idea of not letting life’s downturns get you down. So many people are either facing redundancy or scared about losing their jobs at the moment, so I think Nell’s story is really relevant for the time we live in. I hope that readers will fall in love with San Francisco the way that I did when my husband Bob and I visited last year on our honeymoon. That’s what I love most about the book: I was writing Nell’s discovery of the city as Bob and I were experiencing it, so it’s my personal journal of a very special trip as much as it is Nell’s story. Lastly, my hope is that it inspires people that anything is possible – even if life turns out differently to our plans.

I think I would be Sleeping Beauty because I’m a new mum and the thought of a hundred years of sleep is very appealing at the moment!

Thousands of people dream about going from polished manuscript to agented writer to author with a HarperCollins seal on their book. Can you talk a bit about the process that worked for you, and what you’ve learned along the way?

I was discovered on Authonomy.com – HarperCollins’ website for unpublished writers – and offered a three-book deal by Avon. I had no agent, never expected anyone to read my novel and was completely blown away by it! I’ve since found an agent, so I kind of did things a different way around to the accepted wisdom, but it proves that the major publishers do take a punt on debut novelists. I think the most important thing I’ve learned over the past six years is to trust my gut when it comes to the story I want to tell and stick to my guns to make sure that’s the story that reaches readers.

Even with a large publishing house like HarperCollins, it’s often hard to get your titles out there. How do you make sure your work reaches its target audience?

I think the key is to talk to people and get them involved. I’ve had tremendous fun with my #getinvolved opportunities on Twitter and Facebook, collaborating on ideas with readers and bloggers. In Take A Look At Me Now I asked my Twitter and Facebook followers to suggest names for characters, objects for locations and ideas for the food featured in the book. It meant that we had fun, everyone felt a part of Nell’s story even as I was writing it and when the book came out everyone supported the book because they had contributed to the story. I think increasingly for authors approachability and accessibility are becoming key considerations – but it has to be genuine. I want readers to feel like I write stories just for them, so authenticity is very important.

A writer’s life is certainly not an easy one—from rejections to dwindling sales, to tough reviews, and so on. How did you get through the bad days?

I don’t read reviews on Amazon or Goodreads and I don’t check my Amazon sales ranking ever. I’ve learned the hard way that this can scupper me on the days when I’m doubting my ability as a writer. I especially stay away from Googling my books when I’m writing for that reason! I’m very fortunate with sales – I’ve sold over half a million books worldwide so far – but the benchmark for me has always been that more than five people in the world (i.e. my family and Bob!) read my books. That was always my ambition before I was published and I’m determined to stick to it with every new book I write. The only way to get through the bad days is to be absolutely in love with what you write: so I try to reconnect with that love every day. Without it, I just don’t think I’d survive as a writer.

What is the best piece of advice you’ve received that you can share with aspiring writers?

I love the Dr Seuss quote: ‘Be who you are and say what you feel because those that mind don’t matter and those who matter don’t mind.’ I think it’s so important to write what you love and pursue that, rather than trying to appeal to a certain market or genre.

Your next book, I’ll Take New York, will be released in December. What can you reveal about it?

It’s the story of Bea James and Jake Steinmann, who meet as the only two singles at an engagement party and make a drunken pact to swear off relationships for life. As their friendship grows and they share their favourite places in New York with each other, their lives take unexpected turns and call The Pact into question… It’s an almost-sequel to my first novel, Fairytale of New York – a standalone book that features answers to the ‘what happened next’ questions about Rosie, Ed, Marnie and Kowalski’s that I’ve been asked by readers over the years. So I’ve had great fun revisiting my characters from Fairytale and getting to know new characters at the same time. The ebook is released on 30th October and the gorgeous, sparkly paperback will hit the shops on 4th December. I’m so excited about this book because I’ve wanted to write it for several years. If you love New York and romance, you’ll love it!

In addition to blogging at miranda-dickinson.com and coffeeandroses@blogspot.com, Miranda loves connecting with readers on Twitter (@wurdsmyth) and Facebook. Her books are available at both Amazon.com (US) and Amazon.co.uk (UK).

Comment below to win a signed copy of Take a Look at Me Now. The giveaway will remain open until 11:59 p.m. (PST) Tuesday, May 20, at which point a winner will be chosen at random.

Best of luck to you all!

Also at Amazon, Desperately Ever After is available in both print and e-book formats. Centered around a group of friends who just happen to live in castles … it’s Desperate Housewives meets the Brothers Grimm, perfect for “Once Upon a Time withdrawal” (says Chick Lit Central) and a great beach read!

Next Wednesday, May 21, Elizabeth Maxwell stops by to talk about her debut novel, Happily Ever After, and give away two print copies!

Sign up here for exclusive updates and advanced notice of giveaways

27 responses to “Q&A with bestselling author Miranda Dickinson — plus a giveaway!”