Why every writer needs a dog 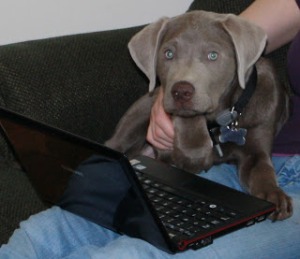 There from the beginning

The great Jennifer Weiner (author of Good in Bed, In Her Shoes, and, my personal favorite, Goodnight Nobody) doesn’t need to give advice to the legions of writers salivating over her wild success. With 10 bestsellers and 11 million copies in print, she could easily spend the rest of her life in seclusion, mailing out manuscripts for instant publication, and cashing in royalty checks. Instead, she is constantly going on Twitter to make adoring fans laugh; on Facebook to provide glimpses into her life; and all over the web to answer questions and make hope-swollen writers feel a little bit at ease.

A few years ago, when I decided to stop dreaming about becoming a novelist and do something about it, I found a great deal of guidance from a spot on her website. In addition to the numerous pages reflecting her success, there was one titled “For Writers.”

It was filled with great advice. But the best, hands down, was this: GET A DOG

Few of fans Jennifer’s fans don’t know that the lovable Nifkin character in her debut novel Good in Bed was based on her rat terrier, Wendell (RIP). She has said his appearance is the only thing from her real life that she translated into her book. No doubt that was a cameo well earned with countless afternoons sitting by Jen’s side as she typed, tearing her from her writer’s cave for a walk around the neighborhood, and forcing her smile when the stress of trying to get published tempted her to cry.

Of course, I don’t know exactly what went on between Jen and Wendell, but this has been my experience with Shadow – for which he most certainly earned his cameo in Desperately Ever After.

The life of a writer is so often a solitary one. Had it not been for my faithful companion, I probably would have drowned months ago in all the rejections, the second-guessing, and the painfully upbeat answers to “So I hear you’re writing a book (long , long pause).” But through all the triumphs and the tears, Shadow’s been there – three toys hanging from his massive mouth, his back arched to pounce, his tail swinging back and forth like a hypnotist’s amulet summoning me to play.

The thing is, dogs couldn’t care less about how the outside world perceives us or what we’re trying to accomplish. They wake up in the morning hungry for our attention. They stare at us until we finally give in and back away from the computer for a much-needed break. I’m sure Shadow’s stopped me from doing irreconcilable damage to my manuscript on more than one occasion – during one of those cabin fever moments when revising gets out of hand and everything that sounded perfect the day before suddenly sounds like  it was written by a kindergartner. He’s been the best kind of coach there is – giving my day structure, forcing me to rest when things get out of hand, and reminding me that life is filled with amazing things that I won’t see if I stay locked up in my office all day.

Even now, while I sit here terrified and ecstatic about finally unleashing Desperately Ever After to the world… at least I know I can make someone uncontrollably happy simply by throwing a ball. We all need that once in a while.

How does your furry companion get you through the hard times? I’d love to know!

A little note: This post was resurrected from my first blog, Me and My Shadow. If you love dogs, have dogs, or are thinking about getting a dog, you might want to check it out.

On tap for next week: Part II of On Desperately Ever After and the launch of my author interview series. My first guest will be Dana Gynther, author of Crossing on the Paris.